1. In 1986 Toobin took “The Oath,” marrying fellow Harvard student Amy McIntosh (above) and promising to be faithful to her.  They have two teenage children.

2. It did not take long for Toobin — who has been called “The Tiger Woods of Legal Journalism” because he shares Tiger’s “weakness for women and wandering eye” — to break that oath. 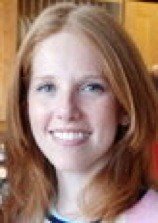 4. Around 2000 Toobin began an adulterous relationship with a woman 13 years his junior, Yale lawyer Casey Greenfield (above), the daughter of Toobin’s former CNN colleague, Jeff Greenfield.  Toobin’s on-and-off affair with Casey lasted nearly a decade.  Eventually Toobin told Casey “he was going to leave his wife for her,” but by then she “had begun to distrust him,” suspecting “he had several other mistresses.”

5. Apparently the seven years Toobin spent at Harvard honing his mind were insufficient to enable him to master contraception techniques, and in 2008 Toobin got Casey pregnant. Toobin, a staunch supporter of a woman’s right to choose in general, was less supportive of a woman’s right to choose in particular.  He told Casey he’d pay for her to swap babies (aborting his baby and having another child later via a sperm donor) and that if she didn’t have an abortion she’d “regret it, that she shouldn’t expect any help from him.”

6.  When Casey decided to keep the baby, Toobin stopped talking to her.  When it was born in March, 2009, Casey e-mailed Toobin inviting him to meet his son, Rory, but Toobin didn’t reply.

7. Rather than resolve his financial responsibilities toward Casey and Rory discreetly, thereby avoiding publicity about his adultery and embarrassment for his wife and teenage children, Toobin allowed the matter to become public.  He refused to communicate with Casey, forcing her to file a lawsuit against him which took two years to litigate, leading to massive publicity in the legal field via Above the Law, (1, 2, 3, 4, 5, 6, 7, 8, 9, 10) and in the general press via Gawker (1, 2, 3, 4, 5), the New York Daily News (1, 2), and eventually the New York Times, in articles that explored Toobin’s long-running infidelity and his sexual fetishes, as sketched above.  Even after being ordered by a court to pay child support, Toobin failed to live up to his obligations until Casey’s lawyers threatened to notify his employers and garnish his wages.

8.  In his Class Day speech, despite his extensive background in the area, presumably Toobin will not delve into the sex lives of overachievers, a topic already referenced on Class Day (by Samantha Power three years ago).  More likely, if past is prologue, Toobin will reference his close friendship during law school with former Dean, and current Justice, Elena Kagan (knowing that decorum bars her from revealing she barely remembers this name-dropping, mendacious moral midget).

This entry was posted in Uncategorized. Bookmark the permalink.